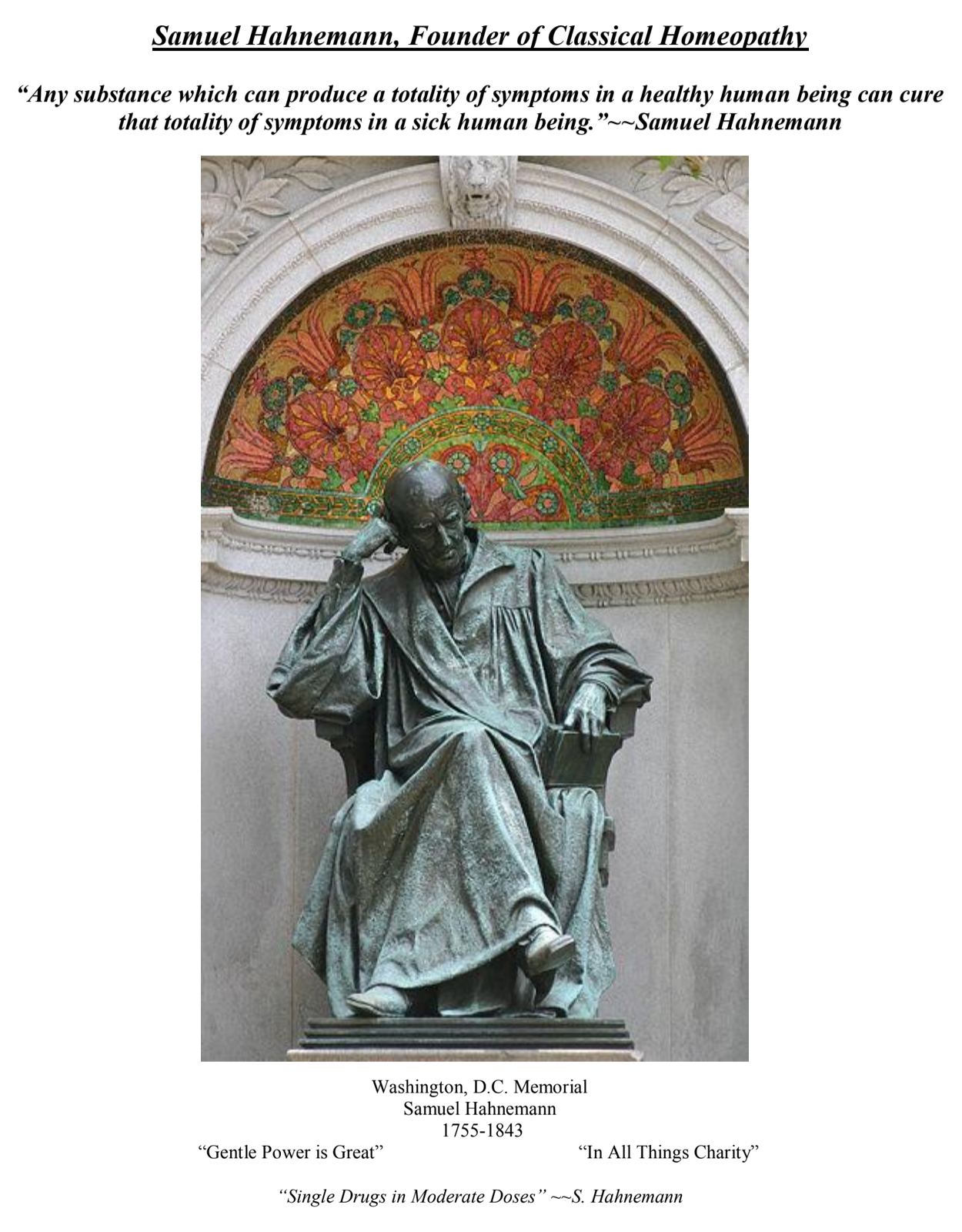 Samuel Hahnemann, a gifted student, chemist, physician and teacher, was tremendously disillusioned by the aggressive medical treatments of his time which included such things as large mixtures of crude medicines, harmful use of purgatives and emetics, bloodletting, leeching, and inhumane treatments for the mentally ill. He held impeccable credentials as a leading experimentalist who, in his time, practiced unprecedented purity in medical science and healing. By the age of 30, he had already left medicine and set out to discover a gentler and less haphazard medical approach than what he had been taught as a practicing physician. This discovery, Classical Homeopathy, would become for the first time in history a scientific working method which scientifically validates the practical application of the ancient theory, Law of Similars (in Latin, “Similia similibus curentur”). An earlier application of this powerfully curative law, for instance, is the use of snake venom or “ante venom” to neutralize the harmful effects of a snakebite. In other words, that which potentially harms you can potentially cure you.

Since its inception in Germany around 1800, Hahnemann faced fierce opposition by skeptical, mainstream colleagues committed to advancing mechanistic medical approaches and, ever since, Classical Homeopathy’s own scientific validity has been obscured by hostile public relations tactics against it. Nonetheless, his more rational medical practice successfully spread to the United States (and throughout Europe) during the early 1800’s and prospered here for over 80 years. At the turn of the last century, it is a little known fact that the majority of medical schools in the United States at that time were originally homeopathic medical schools. However, a growing number of them were closing as newer schools organized by more conventional physicians were skillfully enticed into well- funded university settings to promote far more attractive surgical and pharmaceutical advances than the use of Classical Homeopathy. Without adequate funding or organized opposition against pharmaceutical advances, in particular, this fledgling medical approach nearly passed into obscurity entirely until its strong resurgence in the 1970s alongside a rise in natural and environmental health trends.

Well ahead of his time, Hahnemann recognized and persistently advocated against the indiscriminate medical use of toxic chemical drugs (i.e. mixed doses which contain a large number of ingredients), and other harsh medical therapies of his time (e.g. “bleed and purge” approaches). He set the bar higher each year in hopes of offering a more harmonious system of healing that not only palliates the sick, but cures them. He also knew from experience that the medical approaches he had been taught diminished, if not destroyed, the vital energies needed to heal the body and the mind in a gentle and permanent manner. By the time he was just 30 years old, he had practiced conventional medicine five short years before leaving medicine in disgust, risking financial ruin for his family. Shortly thereafter, he moved over a dozen times in a dozen years, barely earning enough income to support his wife and 11 young children. He diligently worked instead as a reputable medical translator and, in so doing, learned more details about the methods he opposed and became further stimulated to devise a more organized system of using less aggressive medicine to cure. During these childrearing years, he began to publish controversial essays based on his developing ideas.

Dr. Hahnemann was a well-read scholar, linguist and scientific innovator from his earliest training. While translating A Treatise on Materia Medica by Dr. William Cullen, he surmised that Peruvian bark Cinchona (from which quinine is extracted today in the conventional treatment of malaria) was not only used to cure malaria but that this substance produced symptoms which were broadly similar to the symptoms of malaria when ingested (i.e. intermittent fever and spasms). He discovered that when he took repeated doses of Cinchona in greater and greater dilutions, he indeed manifested and experienced malaria type symptoms. In 1790, he scientifically verified his hunch about the Law of Similars that, in fact, malarial-like symptoms of this manifest disease could effectively neutralize the actual disease malaria without toxic side effects when, and only when, administered in miniscule or highly diluted doses to those suffering from the disease itself. This revolutionary medical discovery is one of several reasons why such an impressive monument to him stands in our very own capital city, Washington, D.C. (View more monument pictures).

As his ideas advanced, he conveyed a far more holistic, yet unorthodox, attitude in which the dynamic nature of sickness lies beyond a limited compass of physical symptoms to include certain psychological and energetic profiles which are inherently bound to them. Through careful experimentation, he became an uncompromising master of this art and scientific discovery. In turn, he taught and inspired those practitioners who would listen. Using Classical Homeopathy, he teaches very specifically how to strengthen and restore vital energies, not deplete them. To measure the success of each and every medical therapeutic available, he strongly advocates and demonstrates that the most effective and classical healing methods always aim to stimulate a natural, innate healing reaction by using a single drug in the absolute minimum dose necessary to evoke such a reaction. Equally important is that the use of a single, well-considered corresponding remedy which acts by similar action (i.e. a similimum) not by opposing action or removing symptoms, is solely based upon meticulous experiential record (through direct experience and/or toxicological data).

During his 40s, Hahnemann continued his experiments in a more exacting way on himself, his family and his colleagues time and time again. He used numerous other drug substances with repeated success and verified them through meticulously recorded symptoms. During medical experiments, he believed that the pure action of each drug by itself on the healthy human body should be obtained for the best generalized results (i.e. rather than on animals which are often immune to the effects of drugs or provide variable and unreliable experiential results because they cannot tell us details we might need). Within six years of gathering objective data in this manner, he began practicing and serving medicine again. This time, he used homeopathic remedies he produced himself as he applied the practical methods of his innovative art of healing. Historically, these drug provings, as they are called, (i.e. a healthy human subject takes a homeopathically diluted substance repeatedly until it produces discernible and observable symptoms which can be meticulously recorded) established and advanced the inductive science of homeopathic medicine. Only after rigorous experimentation and extensive clinical practice did Dr. Hahnemann, at age 55, publish his first edition of The Organon of the Art of Healing (1810), the main treatise of Classical Homeopathy. Hahnemann’s own homeopathic pharmacopeia consists of over 50 effective remedies (not to be confused with combination remedies or lower dilutions of substances which act differently upon the body). His original pharmacy record, Materia Medica Pura (1811), has stood the test of time for over 200 years. These single remedies, and by now countless more like them, are still clinically reliable and at our disposal (many are readily available in local health stores).

It is unfortunate that so few in either conventional or alternative medical sciences today know about, study or understand Hahnemann’s historic and revolutionary contributions. Skeptics quickly dismiss these key contributions, as expected, but even some in complementary medicine who actually use homeopathic remedies do so without full knowledge of their history in its purist scientific application. The fact is, as predicted by Hahnemann, medical errors and environmental toxicity to body and planet caused by using conventional medicines are truly to be feared due to the indiscriminate use of large and crude combinations of artificially produced and toxic medicines. The homeopathic pharmacopeia, conversely, now includes hundreds of single dose, time-tested safe, non-toxic, FDA regulated remedies whose little known track record is not only well-documented but whose original remedies remain unchanged since inception because of their safety and simplicity. Thanks to Samuel Hahnemann’s medical contributions, single homeopathic remedies of this kind need never be feverishly scrapped due to side-effect failures or latest disease- care trends in Big-Pharma nor are they perilously swapped for other “off-brand” uses but, shall remain sustainable, dependable and non-toxic for generations to come.

To his dying day, he argued that the scientific validity of experience and observation trumped all medical theories of mechanistic, biological functioning. Not surprisingly, the cost of opposing mainstream medicine left him branded by most of his conventional medical colleagues as a heretic, while others who are able to learn about and appreciate his courageous genius as a medical healer see him as liberator. The U.S. Congress deemed him worthy enough to dedicate a monument to his memory as student, chemist, physician and teacher. The exquisitely designed Samuel Hahnemann Monument in Washington D.C. was proposed in 1892 by the American Institute of Homeopathy and authorized by the U.S. Congress when the majority of medical schools in the United States were still homeopathic medical schools. This enormous Art Nouveau monument and grand bronze statue, designed by Julius F. Harder and sculpted by Charles Henry Niehaus, was erected in 1900 in recognition of Hahnemann’s contribution to medicine here in the United States and around the globe.

"If one has tested a considerable number of simple medicines on healthy people in this way... then one has for the first time a true materia medica: a collection of the authentic, pure, reliable effects of simple medicinal substances in themselves; a natural pharmacopoeia..."  [The Organon, v.143] — Samuel Hahnemann

Cynthia Chrisman, MPH, CCH is a full-time Classical Homeopath who has integrated post-graduate homeopathic education with degrees in psychology and holistic public health promotion. She has served on the Board of Directors for the CHC (Council for Homeopathic Certification), a leader in educational standards for the practice of Classical Homeopathy and on the Commission for ACHENA (The Accreditation Council for Homeopathic Education in North America), a leader in educational standards for homeopathic schools in North America. She maintains a family practice in Cambridge, MA and can be reached at 617.501.2060 or at www.homeopathicprovider.com.